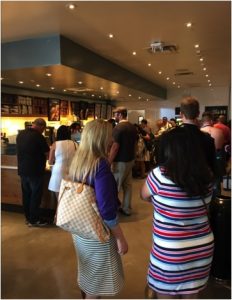 Do you like Starbucks? If you’re a frequent reader of my newsletter you know I’m really fond of the coffeehouse chain…in fact, it just so happens that I’m writing this article from my local Starbucks store.

I started drinking their coffee in my early 20’s and it quickly became my “go to.” One day I’ll get a latte, the next it’s a mocha, and lately I’ve been on an Americano kick. It doesn’t matter if the location is a standalone store or it’s inside a local supermarket, my coffee is always made the way I want it with my name on it. Throw in comfy couches, free Wi-Fi, and a mobile order and pay option so you don’t have to wait in that long line and I’m all in!

In other words, the hundreds of thousands of dollars of advertising and branding that Dunkin’ Donuts, McCafe (McDonalds) and the rest of the competition have invested in hasn’t convinced me to switch allegiances. I have an emotional bias towards Starbucks, and as you can see in the picture above, I’m not alone.

Why is that? I think it’s because the competition hasn’t made the emotional case for why I should switch. And since I already think I know everything there is to know about coffee that’s “right” for me, I tune out their advertising messages.

Which brings me to you and your school’s recruitment of students. The exact same reason I don’t seriously consider switching coffee brands may be the reason many of your prospective students don’t seriously consider you and your institution. It’s a principle called confirmation bias, and it’s an increasing area of study for our team here at Tudor Collegiate Strategies as we map out recruitment strategies and communication plans for our clients.

Confirmation bias happens when we only pay attention to the information or data that affirms our decisions or beliefs. Once we’ve formed a view, we embrace information that confirms that view while ignoring or rejecting information that casts doubt on it. Even though evidence may overwhelmingly contradict our position, we hold tenaciously to our preferred belief. In my case, it may be irrational love for Starbucks coffee.  For you, it could be affecting your prospect’s ability to look logically at the opportunity your school offers them.

Our research shows more and more prospective students are coming into a recruiting conversation with an existing bias either for your school or against it. And whether you like it or not, a lot of it is irrational:

Any of those sound familiar? Right now, confirmation bias – and the negative effects it carries – is creating more hurdles for you in the recruitment process.  It’s a powerful psychological aspect of our decision making, albeit illogical.

So, what are you and your admissions colleagues doing to combat that? And, what’s the best way to compete against this line of thinking on the part of your prospects and their increasingly influential parents?

First, I need you to understand that it’s going to take some time to successfully attack a bias. If you think it can be done in one email or one letter, you’re mistaken. It has to be an ongoing process because you’re essentially going to show and prove to your prospect, and their parents, why their way of thinking is in fact wrong.

Understand that your prospect has probably already made up his or her mind. That might be a good thing for you, or it could be the reason that they haven’t replied to any of your emails or answered any of your phone calls.  Once you agree that most of your prospects come into a conversation with preconceived biases and ideas, I believe it changes the way you construct a recruiting message. The student comes in thinking they know what they want. You then need to approach this situation patiently and also say to them, “I know you feel this way, but I think you might want to take a look at this over here and here’s why.” Again, understand you’re going to be suggesting that they’re wrong. That’s okay. You’re just going to have to tell them what they need to do differently and how they’re going to have to think differently.

They aren’t looking for logic right away.  They’re looking for an emotional reason to have a conversation with you.  Have you ever asked yourself why a prospect doesn’t respond to you when you send out a logical, factual outline of what your school offers, the successful history of recent graduates, and the outstanding community that your students enjoy?  The answer is because they’ve already decided that their original choice is the smartest one for them.  I’ve decided that Starbucks is the right coffee for me based on nothing more than the fact that I’ve drunk it for years and I like the personalized service and look/feel of their stores. Similarly, your prospect is basing their decision on whether to communicate with you or not on simplistic, illogical reasons.  So don’t try to sell them on the logic behind choosing you right away. Instead, work on creating an emotional connection with them.

Discover what makes them happy.  Why have they decided that a bigger/smaller college or another location is right for them?  What are they assuming that makes them feel this way? You need to make the emotional case that (using a previous example for the sake of argument) a private college is worth the extra investment. Only after that basic idea is accepted as a possibility can you then move on to the logical argument that you’re the best option for them.

Last, but not least, be consistent.  This strategy doesn’t take place over one or two emails or in one long phone conversation. It may take weeks to create that emotional connection.  Consistent, long term communication with your prospect using the rule that I talk about in many of the On-Campus Workshops I’ve led is key. That research-based rule says that most students want a message that tells them “here’s why you should pick our college and join our student body” sent every six to nine days throughout the recruitment process.  They need the consistency, and they need it talked about in a personalized way…doing that will make it easier for them to reply back to you and start a conversation.

Understanding this important psychological component of your prospect’s mental make-up is key in developing a comprehensive, effective recruiting message.  Without it, they’re probably going to come up with enough illogical reasons on their own to not talk to you or seriously look at what your school can offer them.